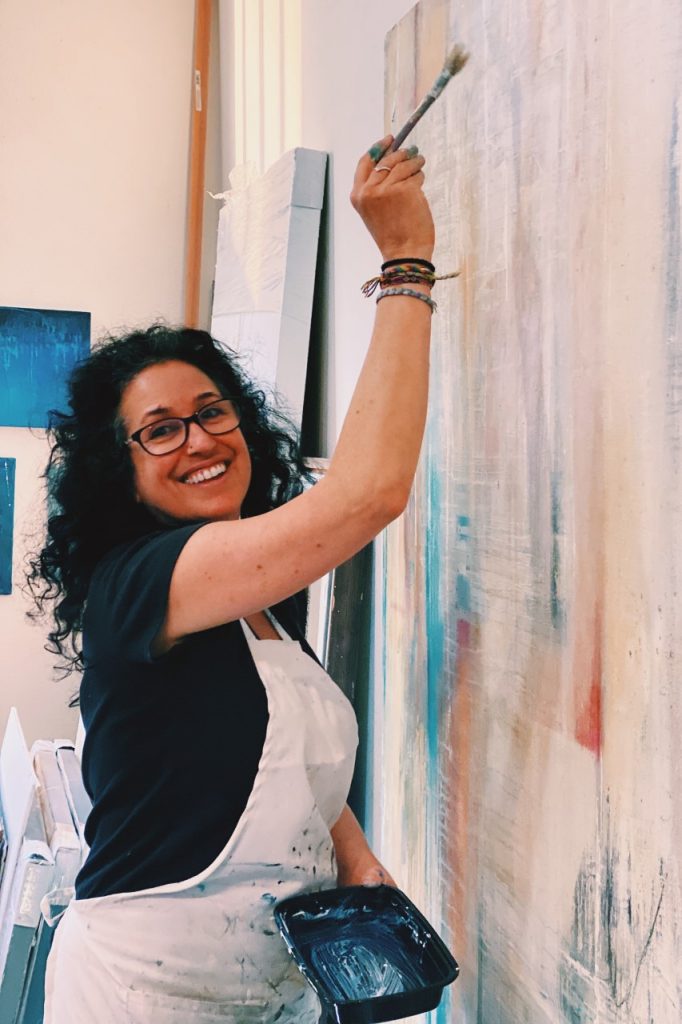 British artist and designer Jules Kobelin has been a freelance commercial artist for over 30 years and her artistic talent has been recognized worldwide. Now based in California, she takes on projects from initial concepts to final production in graphic design, art and film. Her clients have ranged from small-sized businesses to large corporations such as Adobe, NASA, and Ladbrokes.

Jules was educated at The Chelsea College of Art and Design in London where she received her BA in Public Art. Subsequently, she received an Earthwatch Arts Fellowship Award that sent her to a land reclamation project in Bulgaria. In 1993, her art direction for Martin Gold Salon was nominated in the Avant-Garde category of the British Hairdresser Awards and was published in the British Hairdresser’s Journal. In addition, her painted backdrops and set design for Fuji Film were published in The British Photography Journal.

Moving to San Francisco in the late 90s, Jules worked in many creative jobs including framing and gallery fine art sales. She also painted several commissioned murals and explored painting. Her first pregnancy guided her to learning Photoshop and other computer programs at Contra Costa College. While raising her two children, she ventured into graphic design freelancing for small businesses and various entertainment venues. As technology was advancing, she delved into website design which led to video editing, sparking her interest in film.

Jules attended The Berkeley Digital Film Institute and has since worked on numerous productions as a producer, director, editor, art director, and production designer. She has been the production designer on various award winning short films including the critically acclaimed feature film East Side Sushi, which is being distributed by Samuel-Goldwyn Mayer and Sony. Her other credits include Remember Me, featuring the multi-award-winning actress Rita Moreno, and Guitar Man which has won numerous film festival awards around the country. She continues to collaborate with award winning filmmakers to create their vision and tell their stories.

For the past nine years, Lekkermedia has hired Jules as their art director and prop master for several video productions for Adobe. These videos are shared during the annual Adobe Summit and within Adobe.

Inspired by a music video she directed and produced for renowned jazz singer, Jacqui Naylor, Jules founded ARTiDOCs with Marcy Cravat to create documentaries that explored the lives and journeys of artists. In 2012, ARTiDOCs received distribution and released the feature-length documentary DVD, Lucky Girl, A Portrait of Jacqui Naylor. This led to Jules producing and editing Grammy Board member Michael Romanowski’s live filming of the Live at Coast DVD series.

As an active member of her community, Jules served two years on the City of Albany Arts Committee Board. In addition, she collaborated with the City of Albany and KALB channel 33 on various online and broadcast media productions. She volunteers yearly for the Albany Film Festival which is in its 10th year.

Since October of 2015, Jules has been working as a home stager and interior designer with the high-end staging company GiGi Park in San Francisco. In December of 2015, she designed and installed Holiday installations in six large lobbies at China Basin in San Francisco.

As a result of the COVID-19 pandemic, Jules had the opportunity to fully focus on her painting. Through her various creative paths and life experience, Jules brought a new and deeper perspective to her art. She took advantage of the time given to get an art studio and delve into and explore art full force.

No matter the medium, Jules Kobelin connects her passion for creative problem solving and visual storytelling in every project she takes on.